First lets go over the different between a Diverter Valve (DV) and a Blow off Valve (BOV). A BOV vents the pressure from the turbo to atmosphere while a DV recirculates air back into the system. Some engines monitor this recirculated air like my old MK5 GLI EA113 engine. BOV’s were typically bad for engines like these because it would throw off the ECU values by not having the air recirculated back in when its expecting it to. With the MK7 EA888 Gen3 engine the air getting recirculated back in is not monitored anymore and venting to atmosphere is safe to do. Both these engines come stock with a DV as well as most current production turbo cars do. The iconic movie pssst sound turbo cars make on shifting is cause by a BOV.

While browsing Aliexpress I came along this BOV spacer for dirt cheap. What it does is go between your existing stock DV and turbo allowing air to vent to atmosphere when the DV releases pressure giving you that psssst sound. Im normally not a fan of this noise but due to how cheap it was and how easy it is to change it out I figure it was worth getting just to write up this review.

It should be noted that I do have a few modifications that may affect how this may sound compared to the stock setup. Im still using the stock airbox but I have the following changes.

This install is fairly simple and in the link for my Turbosmart DV review you can find a high level overview on how to take off the diverter valve from your turbo.

Warning 1: Some turbo inlet pipes can reduce the amount of space around the DV making it impossible to put on a spacer. So do a visual check first to see if you have room. The BOV spacer I am using isnt listed as compatible for this reason. It likely wont work with the stock Turbo Inlet Pipe. I personally have the Revo TIP and it has more clearance than the stock one. I guess this is why I see most of the MK7 compatible BOV spacers being much lower profile than the ones used on the MK5/6 models even though they use the same DV.

Warning 2: The Turbosmart EM Plumb Back and some other third party diverter valves may not be compatible with this spacer. This is due to the flange on the bottom blocking the ports in the spacer needed for the spacer to release air to atmosphere. It will work with the stock DV as it has a vented flange at the bottom. I will using the stock DV intead of the Turbosmart EM Plumb Back for this reason. 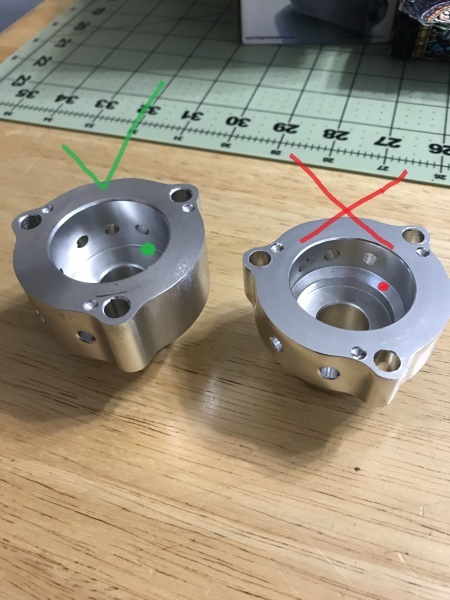 Notice the sidewall doesn’t go straight down on the right one with the red X. This blocks the vented flange from being inserted all the way. This version was for the early MK5 models that originally came with the C diaphragm model of the current divertervale. 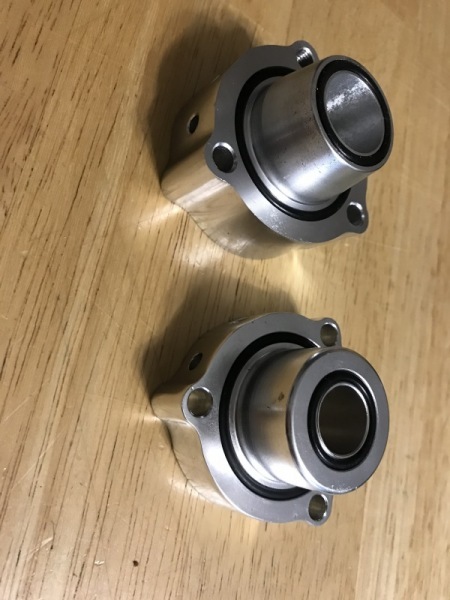 Here is how it looks installed: 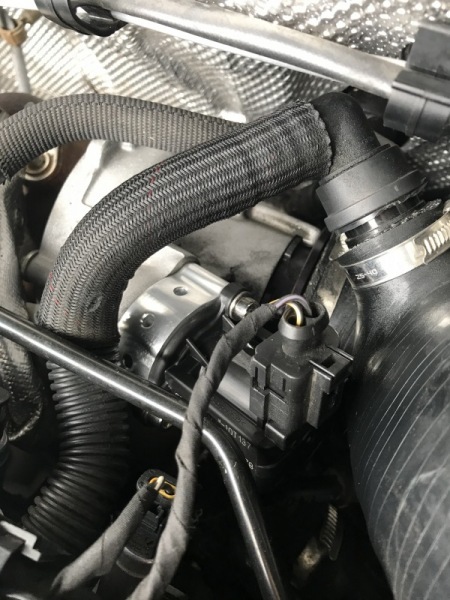 You can see even with my Revo TIP it still doesn’t have much space.

My stock setup really didn’t make much induction noise. To my surprise the spacer adds only a little bit more noise when letting off boost. Its not even close to what you hear in movies or other BOV specific valves. Its subtle and not too obnoxious at all.

Alternatively you can install a hot air intake “cold air intake” and with the filter element being open inside your engine bay and that would probably give you a similar sound, even with the stock diverter valve. I don’t like these intakes because they draw air from inside the hot engine bay instead of using duct work to get cold air from outside. This isn’t as much of an issue when the car is moving at a decent speed, just don’t stop at lights or signs and you will be fine.

In the end I still took it off even though it wasn’t obnoxious. The noise is not my thing and I more wanted to see if I could find a cheap alternative to other BOV’s and spacers I have seen. Again this may or may not work for you due to clearance with the turbo inlet pipe but its cheap enough I think to take a risk.