Well, it’s time, with 95k on the car the stock shocks and struts are a little too sloppy for my liking, and it’s time to replace them. These lasted a bit longer than my old 2006 GLI’s stock setup which I had replaced at 72k miles. I was planning on just replacing the shocks/struts with Koni Red Special Actives, keeping the stock springs, and upgrading the rear sway bar. The Red Special Actives are Koni’s replacement for the FSD’s which I had on my MK5 and liked very much. I enjoyed the stock suspension on the MK7 and found it suited my needs. The Special Actives would be a reasonably priced way of replacing the stock suspension without changing it too much about it. I do not care about lowering the car. The Special Actives would be a slight upgrade over the stock setup and reusing the stock spring would give me a similar feel. The rear sway bar I also plan on replacing to reduce some body roll in the rear. This is what I had planned from the start when I purchased the car. I was only waiting for the stock setup to wear out before I replaced it.

Well, that plan changed when the tuner I use for my car released his Coilover set. Typically I have not considered coilovers due to the cost for a good setup that also has damper adjustment. There are lots of cheap coil sets that don’t have much adjustment and are rather bouncy and wear out quickly. Most of those cheap coil overs are worse than the stock suspension. I keep my cars for a long time compared to most so I need something that lasts and is comfortable. The EQT Balanced Line coilovers meet these needs. Height, damper adjustments, able to be rebuilt and reasonably priced. They were only a little more than the setup I was already planning on purchasing so it was a no-brainer. Adjustment is easy, a coil wrenches to adjust the height and a nob for the damper. The damper nobs can be accessed easily without the need for tools.

Ed, the owner of EQT has a Golf R and tested these coils pretty rigorously both as a daily driver and at the track. He also had a few test mules in the field and the owners of them also raved about them before release. My only concern with them was how comfortable they would be for daily driving. I had no doubt they would perform well on the mountain roads I like to frequent. I asked Ed “my only concern is how plush is it on the softest setting. Worried about daily driving comfort.” his reply was ” Comfort is very important to me… I’m an old man these days and this is my daily driven car. /Redacted Name/ has one of the first sets and believes them to be very plush. My take is that they are firmer than the factory setup but provide a very smooth and controlled ride. “

So I ordered the following to refresh my suspension:

I scheduled an appointment with EQT to get it all installed and set up. Install went without issue. I’m going to hold off on any options about how they feel until I get more time behind the wheel and once they have settled in. Here is how it looked right after they handed the car back to me. 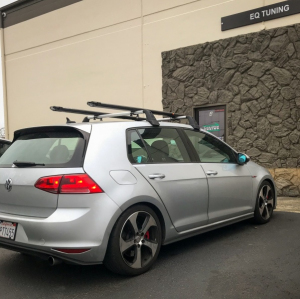 I can say though that the damper adjustment is pretty slick and cant wait to play around with it finding what works for me. To get at the front adjustment nobs do the following.

Now you can see the adjustment nob which is clearly labeled Soft and Hard with arrows. Clockwise is hard and counterclockwise is soft. There are 24 clicks of adjustment. I am starting at 5 clicks from full soft to see how I like it. 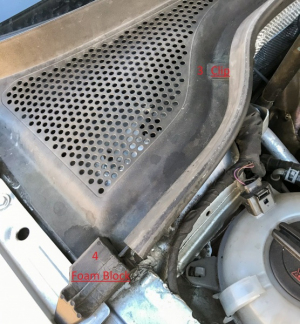 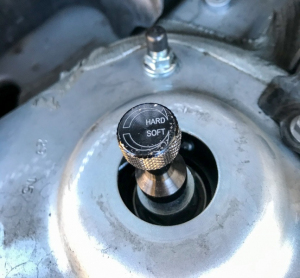 The rear doesn’t require anything to access only to get down and reach under. Right above where it mounts to the control arm there is an adjustment dial below the protective sleeve. This one also has 24 clicks of adjustment and I am starting at 5 clicks from soft. For this picture, I pushed up the sleeve a little to give you a better view of the dial. 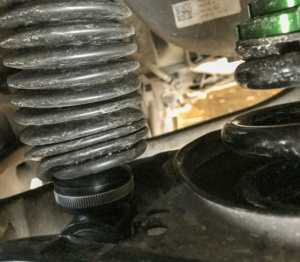 As you can see it’s pretty easy to make a change while out on a drive. Due to how easy it is I might end up with different settings for weekend spirited drives in the hills and my daily commuting. Lots of possibilities here. 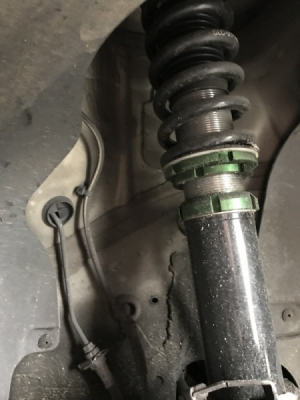 As mentioned once I have more time with them I will give my option on this setup. I am expecting body roll to be significantly reduced and a little firmer compared to stock when daily commuting.

Update: New Suspension is pretty killer. It’s loosened up a bit more since the initial install, it’s now much smoother during normal driving. It’s still stiffer than stock with wide-open damper settings but not bad at all for daily driving. It’s softer than my previous third-party static suspensions on my previous cars. Cornering is fantastic, wow does it just grip and body roll is minimal. Roads have been consistently moist around here lately so I have not been able to go too aggressive for long stretches on the corners. But the few corners I have been able to dig into were exhilarating. It’s exactly what I wanted.

Still playing around with performance weekend settings but for daily I’m doing wide-open rear and 3 clicks from soft on the fronts. 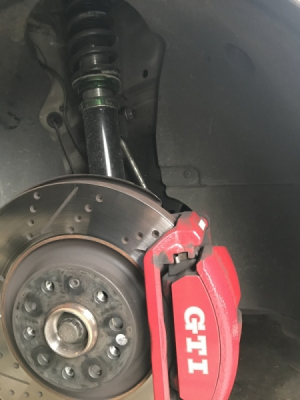 Update2: Played around more with the dampers on my drives in the hills some more. So far it looks like 7 rear and 10 front from full softworks pretty good for me for spirited driving. Still soft enough to take hits from potholes or badly paved areas but stiff enough to hold in the corners. The balance feels great between front and rear with these settings. Based on this I would assume if I keep the font 3 points harder than the rear it will continue to feel balanced if I increase or decrease the dampeners equally.

The suspension seems to be done breaking in now. Took about 2.5k miles for it to get where it is. When you first get them installed don’t worry if it feels too stiff it will get softer. Happy with how this suspension change has turned out. If you are on the fence I highly suggest you go for it. 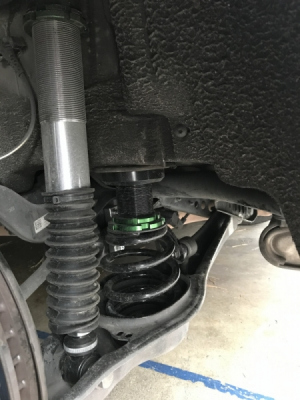 Update3: The Moog endlinks ended up breaking at 23k even with maintenance so went back to OEM endlinks.