Today I got in the car and tried to use carplay but gave me the error: “App-Connect” You can activate the function by buying an activation key from your VW dealer.

After a bunch of fiddling I did a stop and start of the car and it came back on did the same thing, I am able to play the satellite radio and such, just not carplay.

During the drive the second error popped up saying: You can activate “speech operation” by buying an activation key. Please contact your dealer.

Now the headunit does 5 restarts when I turn on the car then stays off. It tried to plays a second or two of satellite radio before it restarts. VCDS shows no new errors, I already had a few existing ones but dont seem to be related. I already had an appointment at the dealer for 2/6/16 to drill the front bumper for a license plate holder install and update the ECU/Headunit software. I will give them a call Monday and tack this issue on.

I did find a thread on vwvortex which a user seemed to have pretty much the same issue as me: http://forums.vwvortex.com
One user ended up being a re-code the 5f unit as a new one, the others all replaced their units. The one person saying it was recorded was a dealer but never gave much info, so we dont know the specifics.

Not sure if they are all related but all happened at the same time as the failure.

Updated 02/02/16:
GTI went to the dealer today and as expected the headunit in the glove box is toast. They could not re-code it due to it restarting so quickly. So a new one will need to be ordered. They don’t stock them in the US and its a special order from Germany that’s backordered. I was notified it may take up to three weeks for it to get here.

I have the car back now until the headunit arrives. I will update again once I have more information. The part they ordered is:
Part Number: 3Q0-035-878 hardware code H25.

Also confirmed the unit that is defective is a Delphi unit. Apparently there are also Panasonic units too. Here is a pic with all the info on the defective Delphi unit: 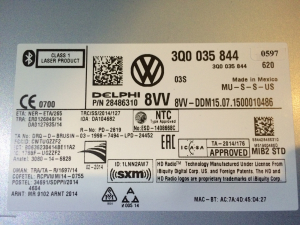 Updated 02/10/16:
Got a call from the dealer today, the replacement part is now on “red order” which the rep tells me is a really long backorder. So what they are going to try and do is have me bring my car in again and open a Techline case so they can remote diagnose the car with people in Germany. I told them I can drop it off any time this week as long as I have a loaner. Which apparently they need to check on if they can give me one….. so im waiting to hear back now.

Updated 02/17/16:
So they never did call me back. After a lot of following up with the dealer on my part (why they cant call me is beyond me) I finally have a loaner and they have my car. Most likely it will be a while, they will follow up with me Monday with the current status.

Updated 02/19/16:
Got a call today saying the part arrived and it had been installed and is being coded. I could come and pick up my car in an hour. So I went down and they brought it around, before I left the lot I went through and tested everything I could think of related to the headunit. This included CD, SD, Bluetooth, AUX, Carplay and lots more with the menus. Everything worked but the trial of my satellite radio. So make sure to check for that if you are still in your trial period. If you are already subscribed on your credit card make sure to switch it over to the new unit and cancel your old.

My guess is they never ended up doing the remote diagnostic since the part came in. As originally specified by them the new headunit part number is: 3Q0-035-878. I have not confined yet if this is a Delphi or Panasonic but I can say there is no lag, album art works. 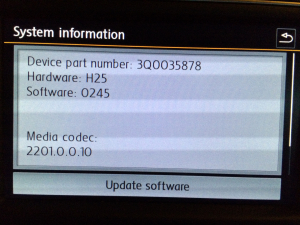