Update 12/28/19: The shocks do not pop up anymore automatically without some assistance. Contacted ECS and they wouldn’t help out, which I expected. Would suggest not getting these as they don’t seem to last long based on others peoples reports also.

Ended up reverting back to the OEM ones and reverting the VCDS coding.

This replaces the stock hatch shocks with higher pressure ones, this coupled with VCDS programming to pop the latch on hatch unlock from the keyfob automatically opens the hatch. The install is extremely simple, 10mm deep socket with wrench and a flathead screwdriver is all I needed. Then a VCDS for he coding. You can find the procedure here on ECSTunings website: http://bd8ba3c866c8cbc330ab-7b26c6f3e01bf511d4da3315c66902d6.r6.cf1.rackcdn.com/PDF_15625_Volkswagen_MK7_Hatch_Pop_Kit_Installation_r4.pdf

As others have mentioned, its surely harder to close the hatch now due to the higher pressure shocks. If you dont put enough effort it may stick shut but not close enough to be sensed as closed by the car showing a door being open. Popping itself is works great, it opens aggressively at first and then slows down as it gets higher. As long as you dont mind putting in bit more effort closing the hatch it a nice easy mod that can be pretty useful.

Here is the stock setup: 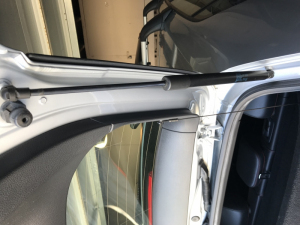 And here is what the new shock looks like: 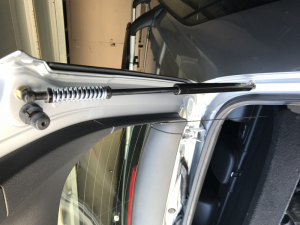