Retired the Indy 500 summer tires. The tread was getting a bit too low and was losing some grip in the corners. They were pretty good for the price and lasted well for a 340 compound tire. For the type of driving I do which is normally early mornings in the mountains, the temps get a bit too cold at times for soft tires like these. So I’m switching back to all seasons which will handle the lower temperatures a bit better.

I went with a slightly wider tire this time around 235/40ZR18, previously I was using the OEM size of 225/40ZR18 for my tires. No modifications were needed, the tire will just have a bit more meat on the width of the tire. I’m still using the OEM wheel on the car and I’m slightly lower on coil-overs. The benefit of going with a 235 over 225 is a wider better contact patch with the ground which will yield better traction and a more comfortable ride. It is a bit wider which helps protect the wheel due to tire overhang. They are ever so slightly heavier and slightly reduced MPG due to more rolling resisted, bigger contact patch when compared to a 225 version. Of course, this tire also costs a little more. 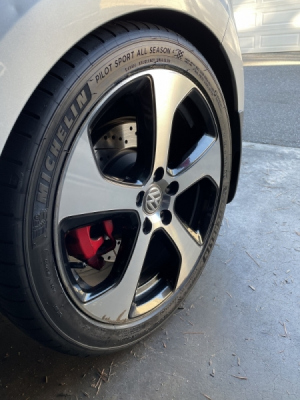 I just got them installed and have not taken a proper drive yet or had an alignment. Once I do I will update you with my thoughts and opinions on them.

Update 12/07/20: Put about 150 miles on the tires over the past week. Initial had some issues with leaky valve stems and wasn’t happy with them. After I realized they were leaking and had the shop fixed them up everything was much better. One thing to remember is that I am coming from a summer tire the 340 compound Indy 500′ in a 225 with to an all-season that’s 540 compound AS4 in a 235 width. These are completely different categories of tires with lots of factors changing. I’m also am not a tire expert, just an enthusiast.

Straight-line: The grip on these tires is very impressive, I was testing them in temperatures between 38F to 65F, and they performed great. I was expecting to have a little less grip in a straight line but honestly, they seem to hold just as well. I do have spark-based traction control which does help a lot with this, its also a wider tire with a bigger contact patch with the road. I was having issues with grip on the summers at lower temps, this was one of the reasons I went back to an all-season. They hook up real nice, it’s surprising for an all-season.

Corners: I feel the sidewalls are a little softer, but this was to be expected. The sidewall though is good for an all-season tire. They handle corners well and had to make the dampening a bit stiffer in the rear suspension to keep my weight more even during hard corners. This was likely something summer tires just accepted while all-seasons needed some more fine-tuning. The tire doesn’t feel like it’s struggling to grip in the corner so clearly, I’m not pushing it hard enough yet, I’m still feeling them out. I absolutely can hear rocks that the tires kick up hitting the side of the car with these wider tires. Need to get me some front mudguards to try and help with this. I’m running them at the OEM spec of 37psi all around, might try adding 1psi to see how they react. When I had the valve stem leak they were down to 34psi on two of the tires and that made everything squirrely as hell, so PSI matters a lot on these tires.

Daily Driving: These are pretty quiet tires, I have a roof rack already so I’m not very sensitive to sound like some are. I don’t have to turn up my music as much with them. They are comfortable too, potholes and other hazards don’t feel as harsh. Due to them being wider I think I see about a half an MPG decrease so far, will have to keep monitoring that. The wider tire also protects the wheel a bit better due to its slight overlap, too bad my wheels are rashed up already.

Overall I think these are a pretty great all-season tire for those who just can’t rock a summer all year long. The 235 width fits great but you might want to get mudguards to help with rock on the side of your car. The ride is comfortable for a performance tire while still being fun in the corners. The grip is exceptional for an all-season and is where this tire really shines.

Update 12/13/20: Have a little under 1k miles on the tires now. Been trying to get out of the house at different times of day and weather to see how they feel. Today we got some rare rain. This likely cleaned off if any was left any mold release still on the tread. Was also able to test their wet traction which was surprisingly great. Traction held way better than I expected in a straight line and corners felt much better than expected. I have to say I’m enjoying these tires, they seem grippy in a lot of situations. Giving up a bit of sidewall stiffness for other benefits of this tire seems to work well for my driving habits.